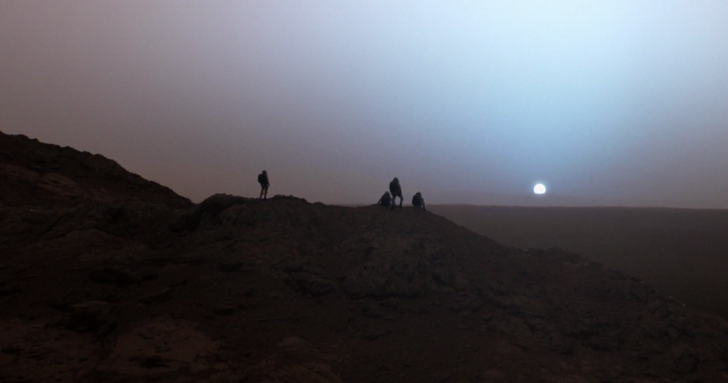 Last year, the film Gravity and the novel The Martian highlighted the depressingly real dangers and loneliness inherent in the exploration of space. This year, the film Interstellar jumps beyond the possible into the fantastic. Space exploration becomes a desperate act only made possible by mystical intervention. Now, as a counterpoint to both, Erik Wernquist depicts the beauty and excitement of human space exploration with a look at what life on our nearest neighbours could realistically look like.

Using Carl Sagan’s poetic musings on the forces that drive us to wander as his narration, Wernquist illustrates scientifically accurate worlds from our solar system and imagines how human occupants might work and play on these worlds. The result is spectacular.

For all its material advantages, the sedentary life has left us edgy, unfulfilled. Even after 400 generations in villages and cities, we haven’t forgotten. The open road still softly calls, like a nearly forgotten song of childhood.

We invest far-off places with a certain romance. This appeal, I suspect, has been meticulously crafted by natural selection as an essential element in our survival. Long summers, mild winters, rich harvests, plentiful game—none of them lasts forever.

It is beyond our powers to predict the future. Catastrophic events have a way of sneaking up on us, of catching us unaware. Your own life, or your band’s, or even your species’ might be owed to a restless few—drawn, by a craving they can hardly articulate or understand, to undiscovered lands and new worlds.

Herman Melville, in Moby Dick, spoke for wanderers in all epochs and meridians: “I am tormented with an everlasting itch for things remote. I love to sail forbidden seas …”

Maybe it’s a little early. Maybe the time is not quite yet. But those other worlds—promising untold opportunities—beckon.

Silently, they orbit the Sun, waiting.

Making Connections
1. Review the images from “Wanderers” in the gallery (http://www.erikwernquist.com/wanderers/gallery.html). Explain which of the images best connect with the following terms: “wanderers” / “adventurers” / “colonists”.

2. Read the narration for “Wanderers”. Find earth based images to illustrate Carl Sagan’s words. Find six images and justify how they connect to Sagan’s ideas.

3. Bring to life one of the moments illustrated in the film. Using the text form of your choice (short story, news report, blog entry, narrative poem) tell the story of one of the adventures depicted in the film. Use a phrase from the film’s narration as the title of your text.

Literary Elements
1. Carl Sagan was a scientist who wrote beautifully. Identify the most effective passage in text of his narration and explain how Sagan made use of figurative language to convey his ideas.

Media Literacy
1. Listen closely to Carl Sagan’s performance of his text. Identify three moments in the recording that demonstrate effective speaking techniques. Explain why they are effective.

The European Space Agency landed a robot on a comet only 4 km in diameter after a 10 year journey covering 6.4 billion kilometers. It’s like shooting a bullet in Toronto to land on a balloon in Tokyo. Magic.

Sadly, at the press conference to discuss the landing of the spacecraft, the lead scientist made a wardrobe choice that distracted much of the Internet’s attention away from his team’s accomplishments.  Mika McKinnon has written a very thoughtful, clever personal essay about the issue:  Thanks To That Shirt, We May Get a Shirt Celebrating Women In Science.

Unintended Consequences Assignment: McKinnon’s essay is a great opportunity to examine the idea of unintended consequences. This assignment challenges students to read and understand her text and to consider how she maintained a wonderful balance of anger, frustration, humour and purpose in her word choice and ideas to create just the right voice for her text.

Beyond that, students could explore other examples of unintended consequences and create their own blog entries detailing cautionary tales telling the story of a small decision that led to unexpected consequences with interesting links for further exploration.