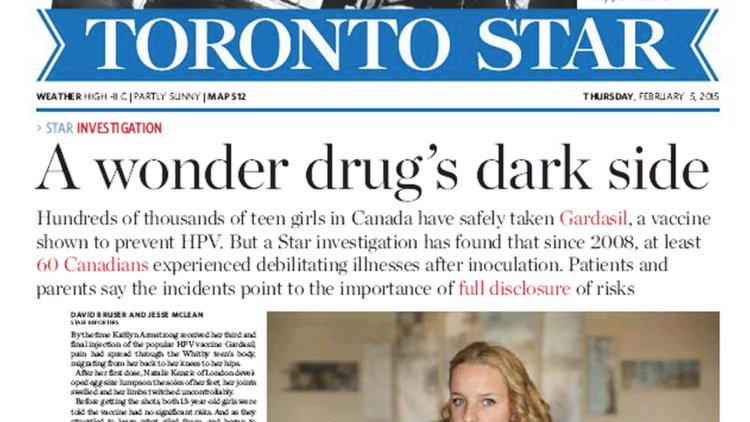 I had the opportunity to visit Mohawk College’s Journalism program recently. It’s very impressive.  I learned that the job of “reporter” has changed dramatically in the last 5-10 years. A reporter for a newspaper is no-longer primarily a writer. A reporter is expected to be a one person multimedia producing, cross-platform writing,  social networker. It’s very exciting and the students at Mohawk were learning every aspect of the business. Which leads me, funnily enough, to the debate over vaccines.

On  February 5th, The Toronto Star’s front page cried out, “A Wonder Drug’s Dark Side”. What followed was a long story that as The Star’s publisher was subsequently forced to admit, “led many readers to conclude The Star believed its investigation had uncovered a direct connection between a large variety of ailments and the vaccine”. That quote is from the disclaimer that now appears on The Star’s website where the article used to be found. The Star has “unpublished” the original story.

The flaws in the original story were laid out in an LA Times report on the controversy: “How A Major Newspaper Bungled A Vaccine Story and Then Smeared Its Critics“.

From an English class point of view this is rich material.